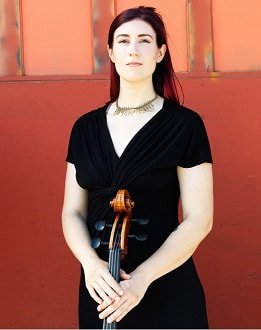 A native of Lincoln, NE, Sophia Potter began her cello studies at the age of 10 with Carol Work.  She received her B.A. in Cello Performance in 2007 from Oberlin College where she studied with Peter Rejto, Hans Jensen, and Amir Eldan.  As a member of the Oberlin Chamber Orchestra, Sophia performed in 2004 and 2005 at Cleveland's Severance Hall.  Sophia has studied chamber music extensively as an undergraduate, graduate, and at summer festivals.  In the span of 4 years, she has had the opportunity to perform Brahms, Dvorak, Schumann, and Shostakovich piano quintets.  Sophia has played in solo master classes for Norman Fischer and Zuill Bailey, and chamber music master classes for William Preucil, Peter Marsh, Roger Tapping, Lawrence Dutton, Nathaniel Rosen, the Chiara String Quartet, Jacques Thibaud Trio, and the Ames Piano Quartet.  She has received chamber music coaching from the Chiara String Quartet, Paul Barnes, Byron Tauchi, Eric Koontz, Robert Shannon, and Alvin Chow.   Additionally, she has taken lessons with Terry King, Vagram Saradjian, Felix Wang, Bonnie Hampton, and Merry Peckham of the Cavani String Quartet.  Sophia has performed under the batons of Eve Queler, JoAnn Falletta, Keith Lockhart, Bridget-Michaele Resichl, and Grant Llewellyn.

In the Spring of 2009, Sophia received her M.M. in Cello Performance from the University of Nebraska-Lincoln.  During this time, she served as Assistant Principal Cellist in the UNL Symphony and Principal Cellist of the UNL Philharmonia in the Fall of 2008, as well as competing as a finalist in UNL's 2009 "Play with the Chiara" competition.   While at UNL, she studied with Gregory Beaver of the former Chiara Quartet.

Following a 9 month stay in Cleveland, OH, Sophia moved to Omaha, NE to found The Rangbrook Ensemble (formerly Kronberg Ensemble). In addition to performing with and managing the ensemble, Sophia is the Director of the Chamber Music Ensemble Program for the Omaha Area Youth Orchestras, as well as the current Interim Executive Director for OAYO. In her hometown of Lincoln, she is the strings coach for the Lincoln Youth Symphony and also serves as the chair of the Artist Selection Committee for the Lincoln Friends of Chamber Music series. A staunch advocate for instruments made by living luthiers, Sophia plays on a 2008 William Whedbee cello.

In her spare time, Sophia enjoys cooking, gardening, running, and spending time with her partner, luthier Dirk Henry, and their two high-maintenance cats.